JJ Vittal received his BSc, MSc and PhD degrees from India and carried out postdoctoral research at the University of Western Ontario, Canada. He then managed the X-ray facility for a few years before moving to Singapore in 1997. He is currently a Professor in the Department of Chemistry, National University of Singapore. He held a prestigious World Class University Chair Professorship at the Gyeongsang National University, South Korea (2009-2013).

JJ’s major research interests are in the areas of solid state materials. JJ published over 490 research papers, reviews and book chapters with ~18000 citations and h-index of 67. He co-authored ‘Crystal Engineering – A Textbook’ and also co-edited two books on crystal engineering. He is a Fellow of Royal Society of Chemistry and Singapore National Institute of Chemistry. He holds editorial board memberships of several journals including Crystal Growth & Design and Scientific Reports. He won several awards including Outstanding Chemist Award (2014), CRISP Award (2013), Outstanding Research Award (2011) and Best Scientist Award (2007). JJ has been highlighted in Angewandte Author Profile (2014). He is the founder and an Organizing Committee member of Singapore National Crystal Growing Challenge (1997-2016). He is an international committee member of Worldwide IUCr Crystal Growing Competition for School Children.

The physical and chemical properties of the solids are directly related to their crystal structures. For example, noncentrosymmetric crystals are required to produce second harmonic generation, ferroelectricity, piezoelectricity, pyroelectricity and multiferroic materials. The crystal engineering tools can be used to modify and fine-tune the chemical properties like stability, reactivity, tautomerism, structural transformation, polymerization, mechanical motion, etc.  It is possible to design organic crystals, coordination polymers and metal-organic framework materials with desired physical properties like solubility, crystal bending, guest and gas sorption, storage, separation and transportation, ion exchange, catalysis, magnetism (magnetic ordering, spin crossover), conductivity, optics (multi-photon upconversion, luminescence and sensing, birefringence), negative thermal expansion and processability.  As more and more exotic new crystals are made, unexpected, unusual and unpredictable properties have been discovered. In our laboratory we have encountered a number of such interesting properties such as structural transformations due to solvent exchange, change of composition and dimensionality due to grinding, unexpected photoreactivity of organic crystals and transition metal complexes and centrosymmetric MOFs showing second-order non-linear optical properties. A few examples will be highlighted in this talk.

Will be updated soon.

Photocatalytic reduction of carbon dioxide on montmorillonite and TiO2 can explain the formation of reduced gases in neutral atmospheres. CH4 and CO were produced during 365 nm UV irradiation of CO2 in the presence of HCl. This photocatalytic reaction represents an approximate simulation of the Martian atmosphere. In the first part of this paper, rate constants, external quantum efficiencies and effectiveness of the reduction process are discussed and compared to those estimated on Mars. In the second part, subsequent reprocessing of the CO + CH4 and N2 containing atmosphere (with the corresponding photocatalyst still present) was exposed to shock waves induced by a high-power laser. This  simulated a high energy density event (e.g. an asteroid impact) on the surface of an early planet exposed to heavy bombardment by interplanetary matter. In the resulting mixtures, glycine and RNA canonical nucleobases were found. Therefore, this process provides an explanation for the creation of reduced gases and the subsequent formation of simple biomolecules from neutral CO2 rich atmospheres and also for the origin of CH4 on Mars. The aim of this work was not to ultimately proclaim that the Earth´s early atmosphere was globally reducing. Instead, evidence is presented to support the fact that the conversion of a CO2 atmosphere to an atmosphere containing CH4 and CO is possible. This conversion must be considered in models of initial early atmosphere transformations. Therefore, a complete pathway leading from a neutral atmosphere to the formation of nucleobases under early Earth conditions has been demonstrated. Additionally, for the first time, this pathway is discussed in relation to the conditions of Mars upon solar irradiation and upon exposure to shock waves generated by the impacts of asteroids or comets. 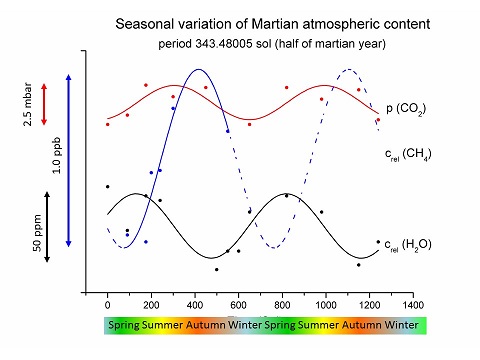 Seasonal variation of atmospheric pressure: CO2 content (red), H2O content (black) and CH4 content (blue). Data points have been scaled to allow for visual comparison of their fits. The data were obtained by the NASA Mars Curiosity Rover and the OMEGA instrument aboard the Mars Express. Fits in the plot represent only trends in the data.

Adiel Coca completed his PhD from Pennsylvania State University in 2007. He was a Visiting Assistant Professor at Franklin and Marshall College (Lancaster, PA) in 2007-2008. He then moved to Southern Connecticut State University (New Haven, CT) in 2008 where he is currently an Associate Professor. He was a Visiting Researcher at Oxford University (Oxford, UK) from July 2015 to January 2016. He currently has nine peer-reviewed publications and is serving as an editorial board member of the Journal of Modern Chemical Sciences.

The tetrazole ring has been featured in several approved anti-hypertension drugs such as losartan, olmesartan, irbesartan, valsartan, candesartan and fimasartan. Tetrazole derivatives have also been used as lipophilic spacers, peptide chelating agents, and as cis-peptide bond mimics. Perhaps the most common application of the tetrazole ring is as a bioisotere for carboxylic acids due to similar acidity and planarity. The tetrazole ring is typically synthesized via the (3+2) cycloaddition of an organonitrile and sodium azide in aprotic polar solvents such as dimethylformamide. In this work, several tetrazole derivatives were synthesized in good yields using a rare-earth metal catalyst. Microwave radiation was used to heat the reactions which were done in an aqueous solvent mixture. The antimicrobial properties of the resulting tetrazole derivatives were determined against Escherichia coli, Staphylococcus aureus, and Pseudomonas aeruginosa. Some tetrazole derivatives showed a significant synergistic effect when used in combination with trimethoprim.

Dr. Fen‐Tair Luo is currently a Research Fellow at the Institute of Chemistry in Academia Sinica, Taiwan. In 1984, he received Ph.D. degree of Chemistry from Purdue University under the guidance of Professor Ei‐ichi Negishi, who won the Nobel Prize of Chemistry in 2010. He also did one-year postdoc work with Professor Carl Djerassi, who was the first one to invent the female oral contraceptive pill in the world. He is now engaging in the molten salt technology to carbonize biomass, so far he has received the patent of supertorrefaction of biomass from six countries.

The heating of biomass in the oxygen-free environment is a proven technique of locking up renewable carbon in a fixed form that will not rot or decay, leading to unwanted emission of green house gases. Traditional pyrolysis using hot flue gas to effect the heat transfer is not in line with economics. We used hot liquid instead to effect the fast heat transfer to comply with economics and to be adaptable for commercialization in the future. Normally, the volumetric heat capacity of liquid is about 2000 times larger than that of gas so that the speed of heat transfer by liquid is at least several hundred times faster than that of gas. Depending on the conditions of production of the charcoal – temperature, resident time, and possible pretreatment of the biomass with common environmentally friendly reagents – the resulting porous biocarbon is suitable for use as biocoal, a coal replacement but a carbon neutral fuel in thermal power-plants; biochar, for burial as a carbon negative soil amendment that can improve water retention and/or provide filtration of chemical toxins and pollutants; activated carbon, a material with high specific surface area that can be used for filtration of liquids and gases, or as a substrate for support in catalysis or for electrochemical reactions. The technology is completely scalable from test-tube experiment, to tabletop machine, to pilot-plant demonstration equipment.